We’re pretty familiar with our Sun. We’ve even sent a probe to go study it; we haven’t done that with any other star. Given how closely we study it, it would be tempting to think of it as a typical example of a G-type main-sequence star, or yellow dwarf.

New research suggests that this is not the case. After conducting a survey of stars similar to the Sun, scientists have discovered that our star is unusually subdued, at least at this stage of its life.

Compared to its peers, the Sun fluctuates in brightness much less, and has much lower sunspot activity, than the average. It’s a curious result – and one that could have implications for the future of our life on this planet.

Understanding how this activity changes is a powerful tool for predicting the Sun’s future. And we actually have a really powerful tool at our disposal for understanding solar activity over the past. That’s Earth itself. The concentration of various elements in tree rings, ice cores and the fossil record can be interpreted to understand how the Sun has changed over time.

From these records, we know that the Sun has been more or less as active as it is now for the last 9,000 years. But far back in the distant past, it’s harder to gauge whether the Sun behaved differently, and whether its current activity level is temporary.

“Compared to the entire lifespan of the Sun, 9,000 years is like the blink of an eye,” said astrophysicist Timo Reinhold of the Max Planck Institute for Solar System Research (MPS) in Germany.

“After all, our star is almost 4.6 billion years old. It is conceivable that the Sun has been going through a quiet phase for thousands of years and that we therefore have a distorted picture of our star.”

This is where other stars come in. We can compare the Sun to others like it to determine whether its behaviour is typical. And thanks to the Kepler space telescope, we have really detailed data. It studied a patch of sky for four years, allowing astronomers to calculate the rotation rates of tens of thousands of stars in its field of view, recording the faint dips in brightness associated with a sunspot appearing and disappearing from view.

This is key – because the rotation rate of a star is thought to contribute to the strength of the magnetic field. “The magnetic field is the driving force responsible for all fluctuations in activity,” said astrophysicist Sami Solanki of MPS.

From the Kepler data, the researchers selected stars with rotation periods between 20 and 30 days. (The Sun’s rotation period is 24.5 days.) They cross-referenced those stars against the data from the Gaia satellite, and identified 369 stars that are comparable to the Sun in colour, mass, composition, age, temperature and rotation rate. 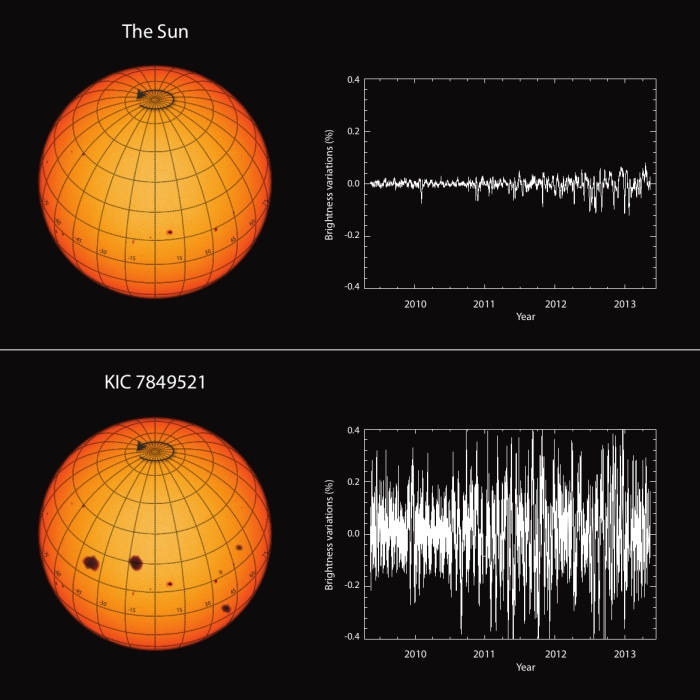 “We were very surprised that most of the Sun-like stars are so much more active than the Sun,” said astronomer Alexander Shapiro of MPS.

But not all stars have detectable sunspots, and their rotation rates cannot be recorded. For a broader comparison, the team measured the Sun against 2,500 stars with unknown rotation rates – and in this case, the Sun seemed much more normal.

It’s difficult to know precisely what this means. It could be that there are fundamental differences between stars with known and stars with unknown rotation rates. As the researchers note, it’s likely that the Sun would belong to the latter group if studied at a distance by a Kepler-like telescope.

“For example, it has been proposed that the solar dynamo is in transition to a lower activity regime because of a change in the differential rotation inside the Sun,” they wrote in their paper.

Another possibility is that stars can fluctuate between activity levels, and the Sun just hasn’t exhibited rowdy behaviour recently. That suggests it could do so in the future; given that a rambunctious Sun can negatively impact communications, navigation, satellites and even power grids, that’s a worrying thought.

However, since the star has been relatively quiet for at least 9,000 years, the timescales for such fluctuations are probably quite long in human terms.

There’s no way, at present, to tell which of these scenarios is more likely. But future observations with even more sensitive instruments could help pony up some answers.