The central section of the San Andreas Fault in California is moving in an unexpected way, scientists say, creating a series of ‘slow earthquakes’ that increase the likelihood of a major quake striking in the future.

It was previously thought that slow and steady movements in this area were safely releasing pent-up energy along the faultline, but the new research suggests the tectonic shifts are actually sharper and more sporadic.

The slow quakes can’t usually be felt by people on the ground, but they have the potential to trigger much bigger quakes, according to the researchers from Arizona State University – like the magnitude 6 earthquake that hit Parkfield in 2004.

“We found that this part of the fault has an average movement of about three centimetres a year, a little more than an inch,” says one of the team, Mostafa Khoshmanesh. “But at times the movement stops entirely, and at other times it has moved as much as 10 centimetres a year, or about four inches.”

“What looked like steady, continuous creep was actually made of episodes of acceleration and deceleration along the fault.”

Using synthetic-aperture radar data, which deploys moving instruments to build up 3D images, the researchers were able to map month-to-month changes along a 145-kilometre (90-mile) stretch of the fault.

The records, which covered 2003-2010, showed movements similar to those along the rest of the San Andreas line, but on a smaller scale. The team described the shifts as “stick-and-slip” periods of motion.

By adding in seismic data to the model, the team was able to link the movements to larger quakes that had happened in adjoining areas. 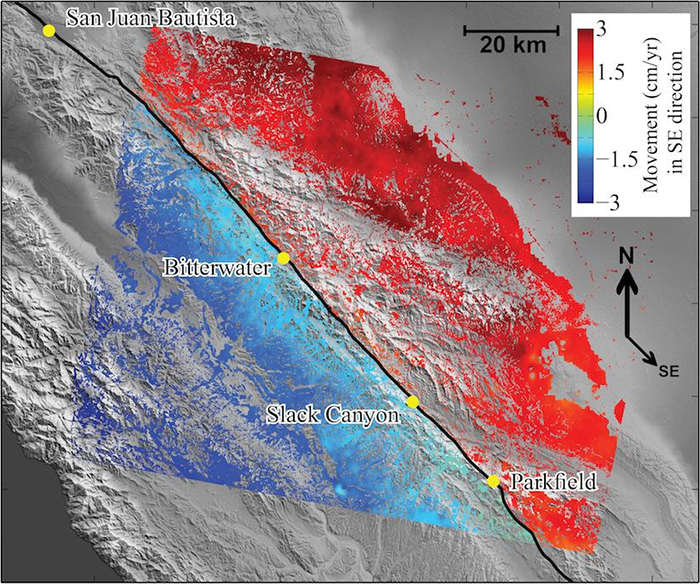 “We found that movement on the fault began every one to two years and lasted for several months before stopping,” says one of the researchers, Manoochehr Shirzaei. “These episodic slow earthquakes lead to increased stress on the locked segments of the fault to the north and south of the central section.”

The scientists think this periodic squashing of materials along the faultline might be causing temporary rises in fluid pressure, which in turn eases the movement of the fault.

Crucially, these kinds of movements aren’t accounted for in current earthquake forecasts. The regular starting and stopping might mean a big quake is more likely than previous predictions would suggest.

Predicting earthquakes isn’t easy, but existing models point to a 75 percent chance of a magnitude 7 or higher earthquake in both northern and southern California within the next 30 years.

And when the next big one does hit, research suggests the eventual bill for reconstruction costs could get close to US$300 billion. The more data we can get on what’s going on before that happens, the better.

“Based on our observations, we believe that seismic hazard in California is something that varies over time and is probably higher than what people have thought up to now,” says Shirzaei.

The research has been published in Nature Geoscience.