Scientists have discovered four new species and two new genera inhabiting the deep, abyssal landscape that lines the bottom of the Pacific Ocean.

The Clarion-Clipperton Zone (CCZ), a vast, recessed fracture zone covering some 4.5 million square kilometres (1.7 million square miles) of the central Pacific, is considered something of a prize in the mining sector due to its abundance of valuable metals and rare earth minerals deposited in polymetallic nodules along the sea bed.

Yet ancient minerals aren’t the only things of wonder down here. In a new study, researchers report the identification of a number of deep-sea creatures unknown to science before now, living at depths greater than 5 kilometres (3.1 miles) below the ocean’s surface.

The specimens in question are known as xenophyophores, a clade of giant, single-celled protozoans that belong to the class foraminifera.

Xenophyophores are one of the most common types of large life-forms found along the CCZ abyssal plains, and while they’ve been described since the late 19th century, there’s not an awful lot we know about them, largely due to the extreme depths at which they reside. 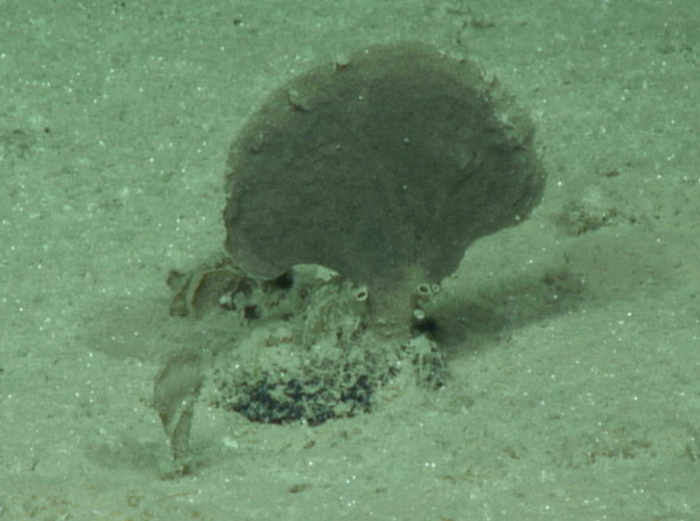 “These four new species and two new genera have increased the number of described xenophyophores in the CCZ abyss to 17 (22 percent of the global total for this group), with many more known but still undescribed,” says marine ecologist Andrew Gooday from the National Oceanography Centre in the UK.

“This part of the Pacific Ocean is clearly a hotspot of xenophyophore diversity.”

Among the new discoveries is the new genus Abyssalia, named after the abyss in which it lurks. In a 2018 expedition aboard the RV Kilo Moana in 2018 in the western CCZ, the researchers found two Abyssalia species: A. foliformis and A. sphaerica.

These xenophyophores have shells called tests, made up of tiny particles glued together. In the case of Abyssalia, the shells are made from a homogeneous mesh of sponge spicules, with no distinct surface layer.

A. sphaerica takes on a spherical shape – resembling a somewhat matted dandelion – while A. foliformis embodies a flatter, leaf-like shape.

The other new genus identified, Moanammina, took its name from Moana, meaning ‘ocean’ in Hawaiian, Maori, and other Polynesian languages. Moanammina semicircularis has a stalked, fan-shaped test, while another new species, Psammina tenuis, belonging to the genus Psammina, has a delicate, thin, plate-like test.

The researchers also discovered what they suggest could be a novel xenophyophore in a spherical ‘mudball’ shape, but unfortunately its mudball-like composition disintegrated before a detailed examination could confirm its identity.

As images go, it’s not a bad metaphor for the delicate, little-understood ecosystem these xenophyophores inhabit at the deep recesses of the CCZ.

“We see them everywhere on the seafloor in many different shapes and sizes. They clearly are very important members of the rich biological communities living in the CCZ,” says oceanographer Craig Smith from the University of Hawai’i Mānoa, the chief scientist on the RV Kilo Moana cruise.

“Among other things they provide microhabitats and potential food sources for other organisms. We need to learn much more about the ecology [of] these weird protozoans if we wish to fully understand how seafloor mining might impact these seafloor communities.”

The findings are reported in European Journal of Protistology.