Our first picture of a black hole was a huge moment for science. But we can’t stop there. We need better pictures that deliver more information. That’s how we’ll learn even more about these strange, rule-breaking behemoths.

Now a group of astronomers from the Radboud University in the city of Nijmegen, Netherlands, along with the European Space Agency and other partners, are developing a plan to get much sharper pictures of black holes.

The Event Horizon Telescope’s (EHT) first picture of a black hole was a scientific triumph and a feat of cooperation, engineering, and technology. Throw in our species’ innate curiosity about nature, too. It’s a potent, effective mix.

But, the picture was kind of blurry, wasn’t it? It’s still a triumph, and lots of research and new papers will result from it. But could it be even better?

The group of scientists has a plan for launching radio telescopes into space to get clearer images of black holes. They’ve published a paperin the journal Astronomy and Astrophysics detailing their plans. Their end goal? To test Einstein’s Theory of General Relativity, again.

The EHT is a group of radio telescopes around the world operating in conjunction with each other. They work on the principle of interferometry.

Together, the ‘scopes act like a kind of virtual telescope the size of the Earth. That’s how we got a telescope large enough to see a black hole. But the EHT is hampered by the same thing as other terrestrial telescopes: Earth’s atmosphere.

Earth’s atmosphere can create a lot of problems for astronomers. Telescopes have to somehow adapt to the atmosphere to gather images of objects at great distances. That’s why telescopes are built in special locations: ideally in arid environments at high altitude.

The EHT’s radio telescopes are in high altitude locations around the globe. They’re in the Alps, in the Sierra Nevada, in Atacama, and in Hawaii. But they’re still limited by Earth’s atmosphere. And that atmosphere prevents the highest-frequency radio waves from reaching the ‘scopes.

There’s another limiting factor for the effectiveness of the EHT: the size of the Earth. On Earth we can only use interferometry to link scopes no further apart than the “width” of the Earth. So any virtual telescope is limited by the size of our planet itself.

The authors of the paper have a solution to both the atmosphere problem and the Earth-size problem. Put radio telescopes in place.

They call their proposed project the Event Horizon Imager (EHI), and they say that it can produce images of black holes five times sharper than the EHT.

The idea is to put two or three satellites in orbit that would act as radio observatories. Out there, they would be free of both of the EHT’s limitations.

“There are lots of advantages to using satellites instead of permanent radio telescopes on Earth, as with the Event Horizon Telescope (EHT),” says Freek Roelofs, a PhD candidate at Radboud University and the lead author of the article.

“In space, you can make observations at higher radio frequencies, because the frequencies from Earth are filtered out by the atmosphere. The distances between the telescopes in space are also larger. This allows us to take a big step forward. We would be able to take images with a resolution more than five times what is possible with the EHT.”

The team created simulated images of black holes that represent what the EHI would be able to see. 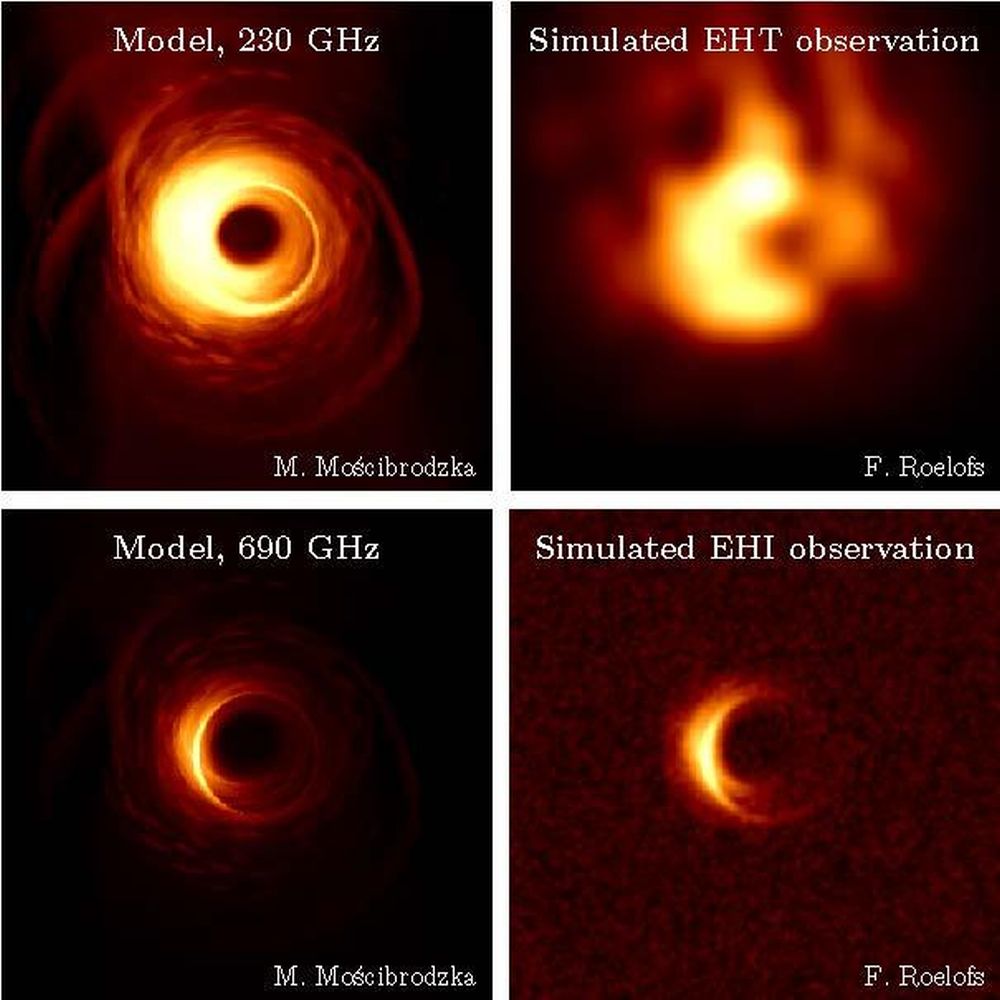 The EHI could capture images with a resolution five times higher than the EHT. (F. Roelofs and M. Moscibrodzka, Radboud University)

Sharper images of a black hole will lead to better information that could be used to test Einstein’s Theory of General Relativity in greater detail.

“The fact that the satellites are moving round the Earth makes for considerable advantages,” Radio Astronomy Professor Heino Falcke says. “With them, you can take near perfect images to see the real details of black holes. If small deviations from Einstein’s theory occur, we should be able to see them.”

Further tests of Einstein’s Theory of General Relativity are one of the main goals of the EHI. In an email exchange with Universe

Yes, there are other theories of gravity. Even though every time scientists are able to test Einstein’s TGR the evidence supports the theory, there are still some niggling questions.

There are multiple alternative theories of gravity out there in the science world, and they’re mostly tied up with our unanswered questions around black holes, dark matter and dark energy.

There are dozens of alternative theories of gravity, and most of them haven’t fared well against the evidence. But they exist because if one of these experiments designed to test Einstein’s TGR proves it false, we have to have another theory to work with.

There are a lot of challenges to work out if the EHI ever comes to pass. With the EHT, each observatory saves its data on a hard drive which is delivered to a data processing center.

All of the data from each scope is combined using an atomic clock for extreme precision. But how will that work in space?

“With the EHT, hard drives with data are transported to the processing centre by airplane. That’s of course not possible in space,” said Volodymyr Kudriashov, a researcher at the Radboud Radio Lab who also works at ESA/ESTEC. According to the paper, a laser link could be used to send the data to Earth for processing.

There’s already a precedent for that, they say, and planned future space missions will refine laser communications even further.

Another challenge is the precise position and speeds of the satellites needed to produce sharp images.

“The concept demands that you must be able to ascertain the position and speed of the satellites very accurately,” said Kudriashov. “But we really believe that the project is feasible.”

“Using a hybrid like this could provide the possibility of creating moving images of a black hole, and you might be able to observe even more and also weaker sources,” said Falcke.