NASA astronauts Bob Behnken and Doug Hurley, who made spaceflight history on May 30 by becoming the first people to launch to orbit aboard a SpaceX vehicle, might see their weekend homecoming plans thrown to the wind.

After docking SpaceX’s Crew Dragon Endeavour ship to the International Space Station and spending two months there, the men are preparing to undock on Saturday. They’re due back on Earth on Sunday at 2:48 pm ET (1848 UTC).

NASA is overseeing SpaceX’s experimental mission, called Demo-2. On Wednesday, the agency gave the company a “go” to proceed with its landing plans.

But Tropical Storm Isaias could force the astronauts to stay in orbit a while longer. The storm already hit Puerto Rico with high winds and flash-floods. Its current path would bring bad weather to several potential landing sites by Sunday afternoon – the planned time for the astronauts’ splashdown.

“We cannot wait to get Bob Behnken and Doug Hurley back to Earth. But of course we have some weather pending,” Jim Bridenstine, NASA’s administrator, said during a press briefing on Wednesday. 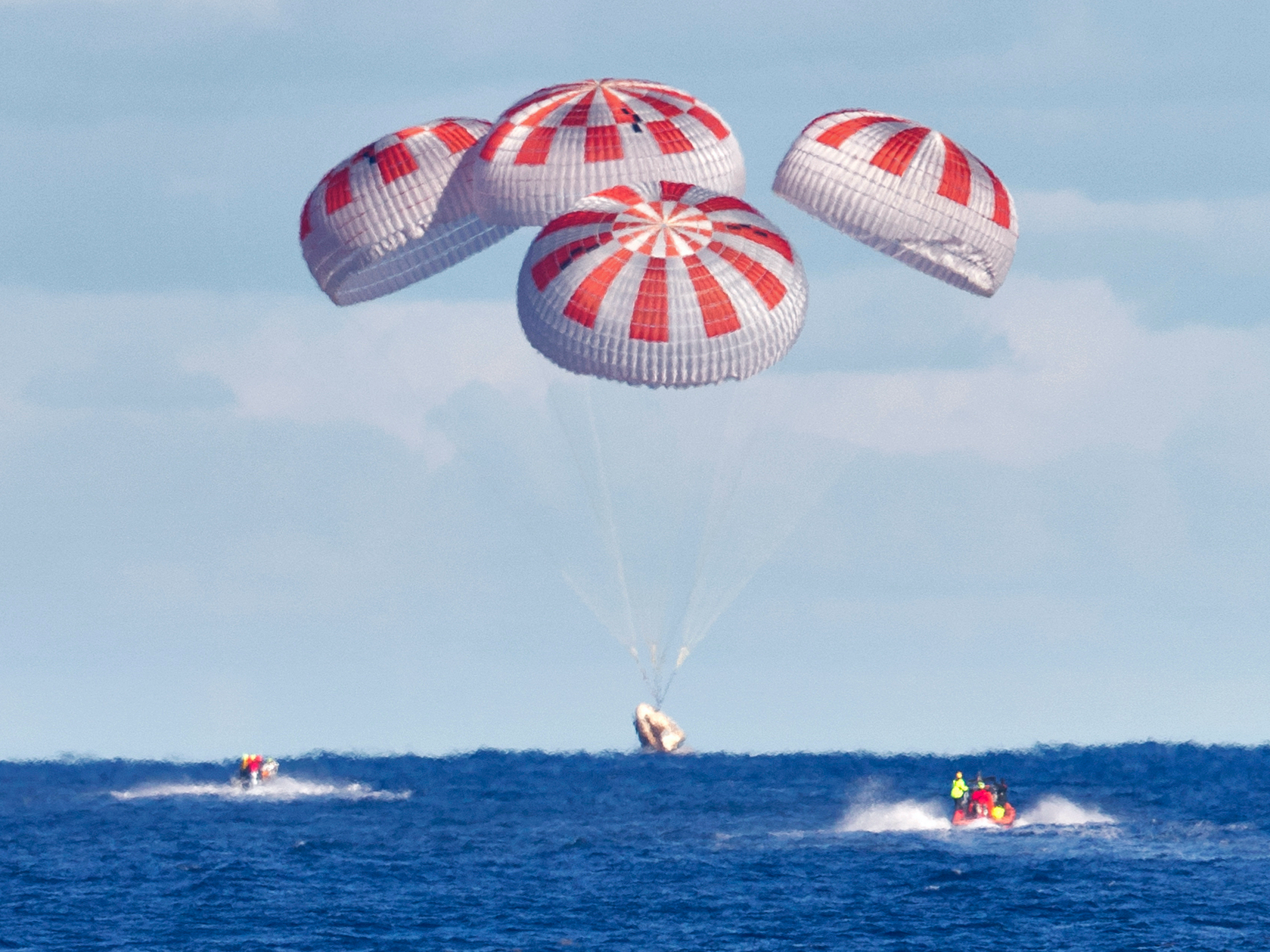 The storm could affect several landing areas just as Endeavour is supposed to reenter Earth’s atmosphere, deploy its parachutes, and splash into the Atlantic Ocean or Gulf of Mexico.

Three of the seven landing zones that SpaceX and NASA prescribed for the test mission, called Demo-2, lie within the “cone of probability” for the storm’s path.

Those splashdown sites (shown below) are located off the coasts of Cape Canaveral, Daytona, and Jacksonville, according to NASA. 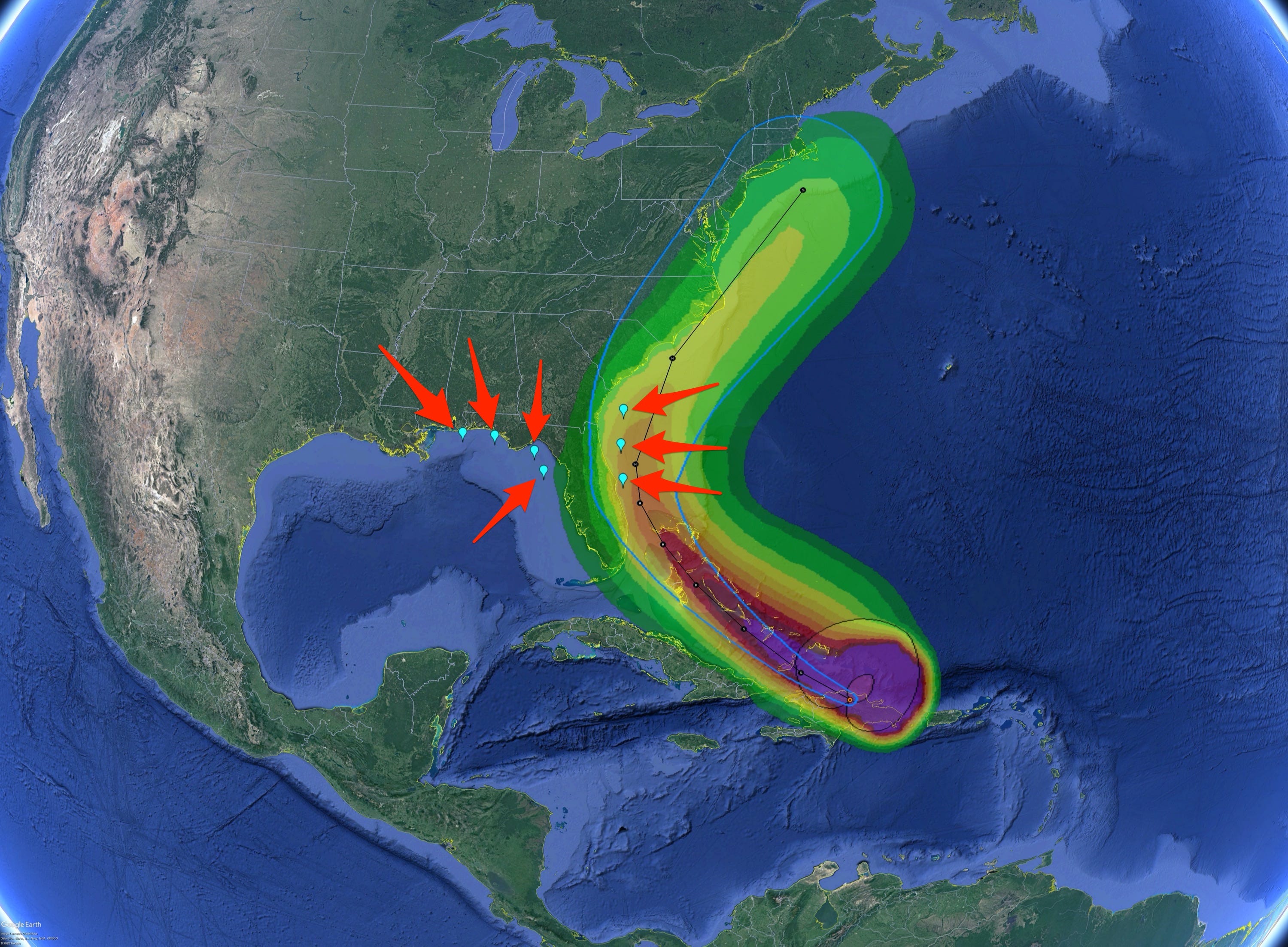 Depending on how large the storm grows and how nasty weather conditions become, mission managers may scrub the undocking and landing attempt. Steep waves, rain, lightning, low clouds, poor visibility (for helicopters to fly the astronauts from a SpaceX recovery boat back to land), or even winds stronger than about 10 mph can trigger a “no-go” decision.

Once the astronauts undock, they have to land within about three days because the spaceship only has enough water and lithium hydroxide – which scrubs carbon dioxide from the air – to last Behnken and Hurley for that long, Stich said.

While docked to the ISS, though, Endeavour can share life support and last much longer. The vehicle has been in space for 63 days, but this version of Crew Dragon is designed to last about 120 days due to its solar-panel design, Stich said. In theory, that gives SpaceX and NASA opportunities through most of September to safely get Behnken and Hurley back home.

Stich noted SpaceX and NASA can make a call as late as an hour before undocking to delay the whole sequence and try again another day.

“If the weather’s looking bad that day, we’re not even going to try to undock,” Stich said. “The beauty of this vehicle is we can stay docked to the space station.”

As part of the process to approve a landing, NASA and SpaceX used a robotic arm to survey Crew Dragon’s heat shield, which must withstand temperatures of of to 3,500 degrees Fahrenheit (1,930 C) during atmospheric reentry, for damage by space debris.

“There were no areas on the vehicle that were any concern for entry,” Stich said.